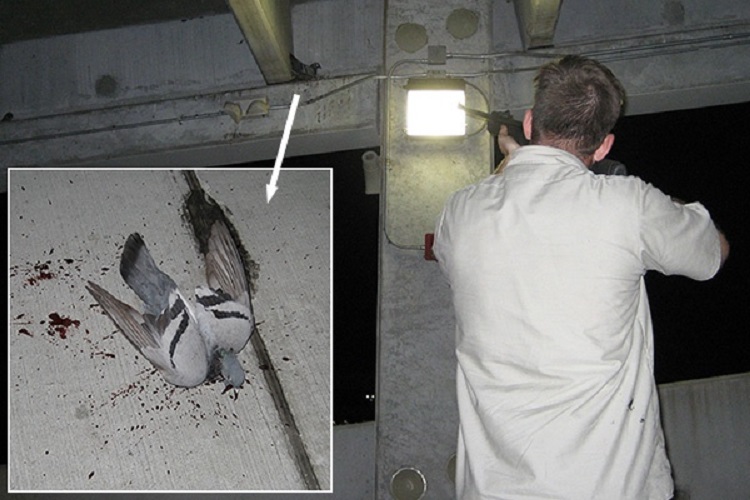 The existence of Pigeons has been traced back to an artwork in Iraq that was discovered that can be dated as far as 4500 BCE. New York City alone has a pigeon population of over 1 million. Their continuously increasing population has been an issue in many urban cities worldwide. Building nests on places on your house you’d never think a nest would be.

Pigeons are described by most as “rats with wings.” These birds produce feces that may contain a plethora of deadly diseases. It’s no wonder pigeons have always been a pest problem for many people. Imagine having a flock of pigeons ruining your front lawn or your apartment window. Pigeons are often found in urban cities because of the tremendous amounts of food and water supplies. Getting rid of these nasty birds are a hassle. Some would even consider shooting these birds as simple as a BB gun.

With this in mind, “is it illegal to shoot pigeons with a BB gun?” Pigeons are not protected by federal or state laws according to the US Fish and Wildlife Service. Pigeons are often considered pests, and shooting them as a form of pest control is not illegal. Though owning a BB gun is a problem in some states in the US. The state of California has a comprehensive policy on non-air and toy guns. The state of Hawaii prohibits owning, selling, licensing, and manufacturing this type of  device.

What are BB Guns?

BB guns are simply air guns that are designed to shoot projectiles known as “BB” or bullet balls. The BB gun was invented in 1886. It was originally made from maple wood and a bit of metal, a spring-piston gun. It was invented by George W. Sage as a weapon used for training or target practice. Most individuals would even consider the use of BB gun as a form of hunting weapon on small animals or pest control.

Airsoft guns have always been compared to BB guns because of their striking similarities. People would always confuse these guns when looking for them in retail stores or even online retail stores.

The Airsoft Gun was invented in Japan in the late 1970s. It was mainly used for target practice, the same with BB guns. The striking difference is that when shooting an Airsoft Gun it will not leave a significant injury to the victim. BB guns can possibly kill a small animal because of the metal ball it used as ammunition. While Airsoft guns use a plastic form of ammunition that can barely damage a victim. Airsoft guns also use “green gas” that was used as a propellant. These guns are popularly known to be used in the sport of paintball.

Unlike BB Guns, the Airsoft is barely regulated by federal or state laws. Federal law only requires the importation of this toy gun to have barrels that have a minimum of 6mm. US law also states that individuals who are 18-year old and above are allowed to even own this toy gun. However, cities like New York and Washington have banned this toy gun entirely. For more information about the regulation on this toy gun, click here.

BB guns are not entirely illegal in the United States. There are just simply states in the US that banned this gun because of safety concerns. There are still ways that you can buy this gun in retail stores. The U.S. Second Amendment states that “the right of the people to keep and bear Arms, shall not be infringed.” Though US Federal law still restricts who can own, possess or sell this gun.

In owning a BB gun one must be familiar with the Brady Act or the Brady Handgun Violence Prevention Act of 1994. If an individual is convicted of a certain crime involving the use of handguns and falls under any of these categories. Then they may be penalized under the Brady Act:

To know more about this, check with a local attorney or click here for more information.

Shooting a Pigeon with a BB gun.

If you coincidentally own a BB gun at home and you’re experiencing a problem with pigeon infestation. It’s no doubt it would cross your mind to shoot them with a BB gun. BB guns were designed to be used for test practice or for hunting. Its use of a metal ball makes it possible to puncture the skin of humans but can be deadly to smaller animals. Using this gun is powerful enough to kill animals, unlike airsoft guns. BB guns can be bought in places like a sporting goods store for prices that can range from $13 to specialty bb guns that can cause about $3,000.

Why You Shouldn’t Shoot a Pigeon.

It is undeniably easy to shoot a pigeon with a BB gun and it is also not illegal especially if you already own one in the first place. But we must bear in mind that these are animals, living, breathing animals. The US Fish and Wildlife Service suggested that instead of killing the animal, try to remove what attracts them to your property or build a bird barrier.

The office even suggested these questions to ask yourself before doing anything as drastic as shooting a bird.

Humane Ways of Getting rid of Pigeons.

The Humane Society of the United States is a non-profit organization in the US that seeks to protect animals. They also seek to inform the public on various humane ways of dealing with animals. The organization provided ways to deal with pigeons listed below:

Stop Feeding the Pigeons (Intentionally or not)

From movies to television shows we see normal it is to feed these bird in cities. We tend to also copy these actions. What we don’t understand is that this is one of the primary reasons why pigeons flock in cities. There is also trash laying around the city, to birds that are a food buffet. Getting rid of these food supplies would definitely reduce the population of pigeons and restrict them from flocking.

Flat surfaces are the perfect place for these birds to multiply. By removing flat surfaces you would definitely lower the chances of them nesting here and multiplying by the hundreds. I suggest you use a variety of methods like bird barriers and wires.

This information came from the official website of The Humane Society of the United States. To learn more on how to humanly manage these birds, click here to go to their official website.

Which BB Guns to Buy, Just in Case.

I am definitely not encouraging anyone to use a BB gun to shoot birds. BB guns are also used for target practice or for hunting. But just in case you are looking for the best type of BB guns to buy online, we have summarized three from Walmart.

The Crosman 760 Pumpmaster is a BB rifle that can shoot up to 700fps. It has a BB capacity of 200 and a velocity of 645fps. It weighs about 2.75lbs and has a length of 33.5in. This type of rifle is perfect for beginner hunters because of its easy-to-use features. The Pumpmaster has been around for over 50 years now, no wonder this rifle is the perfect beginner’s rifle.

Another one from Crosman is the Mako Blowback Semiautomatic BB Pistol. This gun a CO2-powered BB pistol that can shoot for up to 425 feet per second. The coolest thing about this BB gun is that it’s a pistol. Pistols are handguns which is made to be carried around. It has a spring-activated BB clip that drops out with a push of a button and holds over 20 BB pellets.

The Barra 1866 Cowboy Rifle on the other hand is a rifle that was invented by Walter Hunt. This type of rifle is a Volition Repeating Rifle, it has a complex system of mechanics and a lever that is able to quickly fire. This gun uses a different type of ammunition called a rocket ball. Comparing it to the Crosman 760 Pumpmaster this BB gun is far more complex and is for gun experts.

We must bear in mind that the reason for pigeons having a continuously increasing population is because we give these birds the essentials to do so. These birds are the first birds to have ever been domesticated. Shooting them is not just inhumane but would be considered animal cruelty regardless of your purpose. There are definitely dozens of ways to control these birds. Killing them by shooting them with a BB gun should be a last resort or not an option at all.