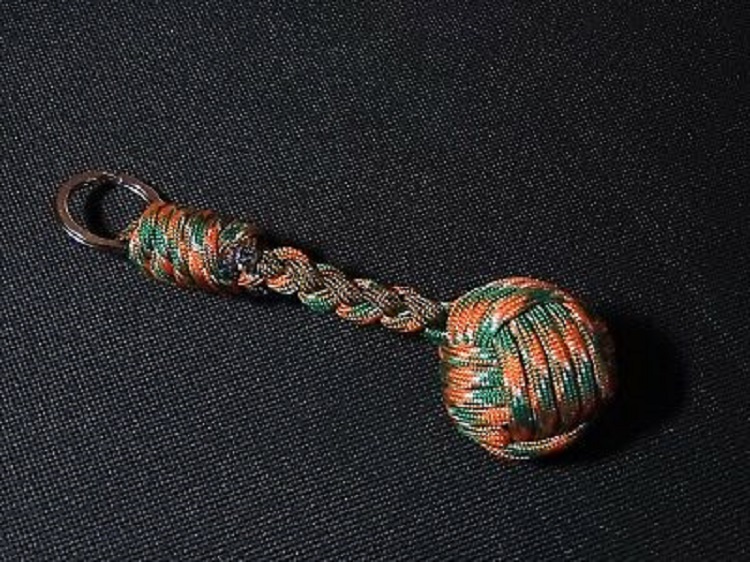 It’s midnight. You’re walking along a dark alley in the city. Just as you turned around you see a man following you. You suddenly remember in your pocket you have a key chain that has a heavy knotted ball at the end of it, perfect for hitting someone. Just as the man gets nearer, you swung that key chain at him and hit him hard on the head. You now have an opportunity to run and call for help. This key chain with a heavy ball is what we call a Monkey’s Fist.

The Monkey’s Fist is a perfect example of a self-defense weapon. It has been used since the early 1800s where sailors toss lines between ships or to shore. Monkey’s fists at that time are cannon ball-sized. While monkey’s fists today are as small as marble but can still pack a heavy blow on the head.

I bet now you’re thinking that it’s a great idea to have this safety object with you at all times and that everyone should own one.

With this in thought, the question on everybody’s mind is, “are monkey’s fists illegal?” Monkey’s fist are illegal in states like California (California Penal Code Section 1 12020) and Oklahoma (Oklahoma Statutes Title 21) . In states like Nevada (Revised Statutes 202.350), Washington, and Minnesota it’s a misdemeanor to even carry one.  Each state has a different approach on the regulation of this knot. I suggest you look into your state’s official website and search up statutes on this.

What are Monkey’s Fists

When you’re saying Monkey’s Fist you are referring to the knot that is tied around a hard object that is shaped like a monkey’s fist. This type of knot is also attached to a length of rope or string. It was used by sailors during the 1800s as a combat weapon but its true origins remain unknown.

A dictionary defines a weapon as something that can cause injury or can destroy. The monkey’s fist, mostly used to hit someone, is the reason why most states in the US declared this as a weapon.

Why this Knot became a Illegal

The reason why this object was categorized as a weapon is because of its cousin, the slungshot. A slungshot is simply a tool that has a weight at the end of a long cord with a monkey’s fist knot containing a heavy object. The only difference is that the slung shot’s long cord is tied to make a loop to be able to hold unto.

A slungshot would not have been a slungshot if it wasn’t for the monkey’s fist knot. You would also recognize this object as seen in medieval-themed movies, it’s called a Flail. It’s the same concept, only this time it’s made of metal and the end of that rope is a small wooden staff you can hold on to.

One famous account in the history of the monkey’s fist in the US is Abraham Lincoln’s famous 1858 Almanac Trial. Lincoln was defending his client, William ‘Duff’ Armstrong who was accused of killing a man with a slingshot before midnight on August 29, 1857. A witness said that he saw the crime happen ‘by the light of the moon’. Abraham Lincoln then made an almanac that indicated on that particular night, the moon was low on the horizon, therefore falsifying the witness’ claim that he saw the crime happen. After this, the slungshot suddenly became illegal in most states in the United States.

Monkey’s Fist is Legal in Florida.

Governor Rick Scott signed a bill in 2016 that legalizes the production and possession of slung shots. Because the slungshot is now legal, the monkey’s fist too became legal in the state of Florida.

House Bill 4009 removed the slungshot from the list of illegal weapons in Florida. The bill was introduced by Republican representative Neil Combee of Polk City in 2015. For 148 years, the slungshot was illegal in the state of Florida, and because of classifying this as a self-defense weapon, it has now become legal.

Louis Krudo is a self-defense expert that was interviewed by Bay News 9. He pointed out the benefit of having this object be a self-defense tool that can be used by the population. According to him, the slungshot/monkey’s fist has many uses and not just a weapon for hurting other individuals.

How Useful is a Monkey’s Fist

As was stated before, the monkey’s fist’s complex knot became useful in many occasions. It is now mostly being used for sports such as skydiving, and mountain rock climbing.

The simplistic design of the monkey’s fist turned into an accessory. It now became a key chain that perfectly goes along with your keys and fits in your pocket. I recommend buying a safety key chain such as the Nautical Maritime Marine Sailor’s Monkey Fist Keychain. There is a lot of information online that says how dangerous monkey’s fists are, but this product is not a weapon capable of hurting anyone. This keychain has a paracord that can stretch for up to 4 1/2 inches in length and is made 100% out of nylon. It is perfectly designed to be extended or shortened. Because the use of the Monkey’s Fist can be traced back to sailors from the 1800s, this key chain is good for pairing with your boat keys. Check it out on Amazon here.

One could have never noticed that owning a dog means that you would probably also own a monkey’s fist in your house. The Zanie’s Monkey’s Fist Knot Rope Dog Toy is a perfect example of this toy. These dog toys are bought by dog owners whose dogs are sometimes bigger than them. It is designed for aggressive-chewing canines that can improve the dog’s oral hygiene. Zanie’s rope dog toy has a length of over 15 inches and a knot size of 2.75 inches. If you want to find out more about this special type of dog toy, click here to proceed to Amazon.

You can DIY a Monkey’s Fist.

There are different sizes of monkey’s fist that you can buy at the moment. But sometimes these sizes vary so much you won’t be able to decide or even find the size that’s most useful for you.

If you don’t own a monkey’s fist, knowing how to tie one can be a life-saving skill. This process may take a lot of materials and effort but the results are worth it.

To clearly see the directions on how to tie a perfect monkey’s fist knot click here. These versatile survival tools are cheap and easy to make. Owning one would be beneficial for you but knowing how to make one is worth more.

Making your own monkey’s fist to be an accessory is a good idea. But if you are still having a hard time tying the knot, you can buy the Monkey Fist Knot Key Chain. It has a brass top with a top that unscrews to be easily attached to your keyring. It is very compact and durable. Most consumers love this product because it makes the occasional finding your lost keys easier. One of its features is that it’s perfect for stabilizing the key chain while being durable. To find out more information about this product, click here.

The Monkey’s Fist is one of the most helpful tools ever created. It is so versatile it can act as a defensive tool while still be able to help you climb a mountain or parachute from an airplane. The knot is still being used now even though it was created so many years ago.

In the United States, it is illegal to even possess such a tool because of the possible implications it may cause when being held by the wrong hands. The design of the monkey’s fist is to carry heavy-rounded objects that are ideal for throwing to another individual which may cause serious injuries. Nevertheless, this object is meant to be used for self-defense. Having one would guarantee the safety of so many people.

Owning a monkey’s fist or slungshot might get you in serious trouble depending on which state you live in. If you live in Florida, then it is perfectly legal for you to possess, create, and buy a monkey’s fist. But if you’re unlucky enough to be in a state that is illegal to even buy a monkey’s fist like California, I may also suggest looking for other defensive tools. Click here to check out more self-defense tools you can possibly own.