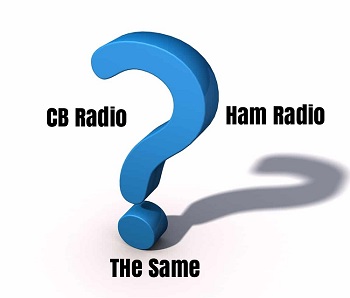 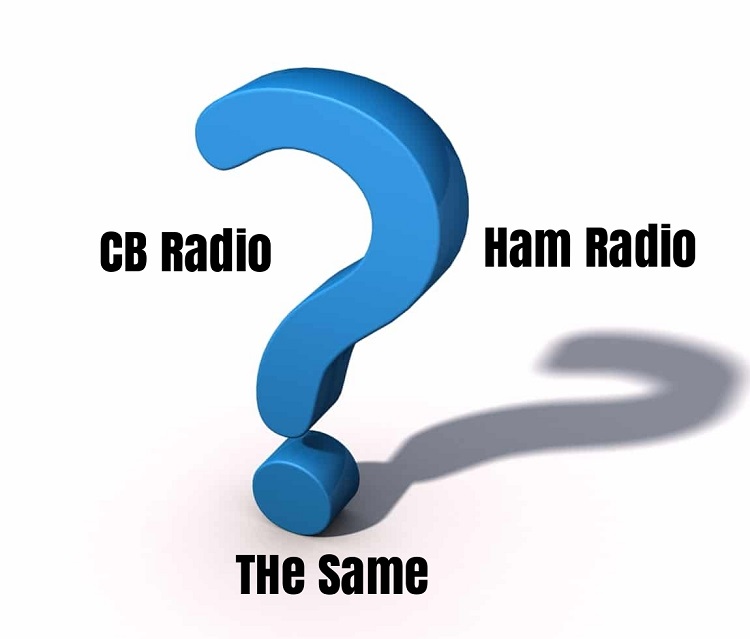 The global economy is collapsing around your ears. Now is not the time to realize you forgot about communications when you put together your emergency plans. Then again, now is better than never. Unless you plan to live a solitary life inside a bunker, or on some remote mountaintop, then you’ll eventually need to communicate with other survivors. I grew up around CB’s and Ham radios, so I can help you discover the differences and decide what works best for you. Realistically, having the right tool or skill is always crucial to survival.

Is a CB radio the same as a Ham radio? CB radios and Ham radios are not the same. Not only do they function on different frequencies, but they have different capabilities. Perhaps more importantly, they have vastly varying ranges.

How Does CB Radio Work

Unlike Ham radio, CB radio is more limited in its scope. Although you can get high-end CBs and antennae that boost your signal, typically two to five miles is your range. Moreover, the range limitation isn’t the only significant difference.

CB began in the late 1940s and gained popularity during the seventies. Many truckers use these radios as a way to communicate. They share information, often raunchy jokes, and use the channels to help navigate the nearby roads.

Using a CB, you have forty available channels on a single band. Furthermore, CB or Citizens Band radio is free from the licensing and educational restrictions of Ham Radio. You don’t need any specific permissions so long as you use an unmodified, legal CB radio on the specified channels.

Also, CB radio is limited by law. They can only transmit at up-to five watts. Anything beyond that level of power requires licensing.

It’s not a hundred percent freeform when you use a CB radio. In particular, there are two reserved channels. Numbers nine and nineteen have specific uses that all users adhere to strictly.

Channel nine is an emergency frequency. This means it’s used for traveler assistance and other emergencies. Meanwhile, channel nineteen is reserved for truckers—both long and short-haul truck report on road conditions, blocks, and other potential issues.

Some of the other channels have ‘normal’ uses, but they aren’t mandatory.

It helps to know a little about the culture of CB radio and its proper uses before you just hit the button and start talking. However, it’s not required other than leaving the emergency and trucker frequencies open.

My top pick for CB radios is one that has an ideal combo of value and features. You want a radio with an emergency button for those disasters that are more personal. Plus a good warranty is vital.

The Uniden PRO520XL from Amazon is a fantastic example of form and function. Not only does it look sleek, but it comes from a well-known manufacturer. With features like the emergency channel button and a two-year warranty, it’s hard to find a better quality option for a beginner. You can pick one up by clicking here.

How Ham Radios are Different from CB

CB radios have far less power than Ham Radio. If a CB can chat locally, then a good Ham radio is capable of communicating with the world. Resultantly, Ham radio operators must have licenses to operate.

You are allowed to purchase a Ham radio and listen to it. However, before you ever touch a button beyond the power switch, you’ll need to get the necessary paperwork. Luckily, the test isn’t horribly difficult, though most people do need to study beforehand.

While short-range CBs limit you to local conversations, more serious fans can quickly become part of the wider radio world with a Ham license. If you want to communicate in times of emergency or join multinational conversations, then this is the radio you want.

Although you can’t use a Ham radio for commercial purposes, it’s a great way to talk to people over much greater distances. You’ll have access to a wide range of frequencies, about a hundred and sixty meters through GHz bands, rather than a few dozen channels on a single band.

I never recommend taking illegal actions, so let’s look at what you need to get a license for Ham radio use. A basic test with about thirty-five questions will get you a world of access. All amateur frequencies above thirty GHz are available to HAM operators.

There are three different classes of licenses available. Naturally, the higher your rating, the more frequencies are available to you. Anyone can take the test with a single exception. Representatives of foreign governments can’t take the tests here in the USA.

According to the National Association for Amateur Radio, “Amateur Radio is regulated by the Federal Communications Commission (FCC) under the Communications Act of 1934.” The FCC oversees testing for Ham operators, and your license lasts ten years before you need to renew.

Most of the test questions will likely have to do with the theory, operating practices, and regulations. Classes of Ham license are Technician, General, and Amateur Extra Licenses. The first grants you the least access, and the last gives you the greatest privilege.

Getting Your Ham Radio

Choosing your first Ham radio is exciting. Still, you mustn’t let your enthusiasm get the best of you. Pick a model that has a hardened shell for traveling. You also want a small but powerful option from a reliable company.

Check out the BaoFeng BF-F8HP (UV-5R 3rd Gen) from Amazon. The latest model has twice the power of previous editions. More importantly, it was designed in the US, so it’s more intuitive for Americans to use. Plus, you’ll love the PC03 FTDI Programming Cable that makes it easier to program your PC for compatibility. Learn more by clicking here.

Choosing a CB Vs. Ham Radios for Survival

Now that you know what the fundamental differences are between CB radios and Ham radios, which one should you choose? Mostly, it depends on what you need your communication to do for you. Are you seeking a short-range system that’s better than a walkie talkie? Or would you prefer the ability to talk to survivors all over the world?

Your needs determine how you prepare for emergencies. Whether you’re alone or working with a group that changes how you approach prepping, likewise, how much you need to move from any given location can also help you decide. Every scenario and person has their unique needs. Addressing them is why you’re here.

When you’re getting your survival group together, you need an excellent way to talk to each other. Whether you need to caravan to a group bug-out location or chat as you run patrols, standard walkie talkies aren’t always up to the task. A CB is much more powerful than most walkies.

Traveling with a group, a high-quality CB for each member, is your best bet. You can also use them to help navigate highways and back roads. Avoiding trouble by listening to the chatter is a superb use for these clever radios.

I’d also recommend you consider the exceptional President ANDY Compact AM CB Radio. You’ll appreciate the plethora of features, like seven weather channels. Yet, for all the incredible details, it’s not difficult to learn. The smaller size allows you to place it wherever you need it quickly and easily. Read the Amazon reviews here.

Use a Ham Radio

Sometimes you just need more range than a CB can give or more bandwidth. Regardless of your specific need, you’ll get more range out of a great Ham radio. More importantly, you can monitor the chat on emergency frequencies easily. Half of any successful survivor strategy is knowing where not to be.

Groups can also use this style, but typically a CB is sufficient for that. However, when you plan to thrive after TEOTWAWKI, contacting other savvy survivors all over the world is a great way to trade skills, news, and more.

Try the Greaval Ham Radio Walkie Talkie UHF VHF portable set. It comes with everything you’ll need from an earpiece to cords, mic, two batteries, and more. With a thirty-day hassle-free return policy and an eighteen-month warranty with tech support, this is the complete package. Click here to check prices and availability on Amazon.

In my opinion, you need both a Ham and CB radio because they are so different. Not only will having two radios give you twice the chance of contacting survivors, but you have a backup system. When SHTF, you want redundancies and options.

Before you pack up your gear for everyday purposes and bug-in or bug-out plans, watch this video to bone up on the uses. Make sure you put your radios wherever they will do you the most good. Every survival plan is unique, and only you know what will work best for you.

When in doubt, double down. You can always pick up duplicates of your CB and Ham radios as you expand your emergency preparations.