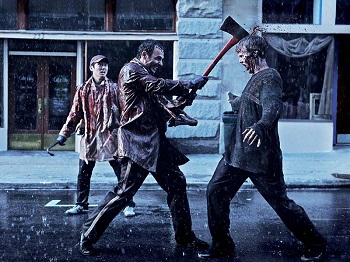 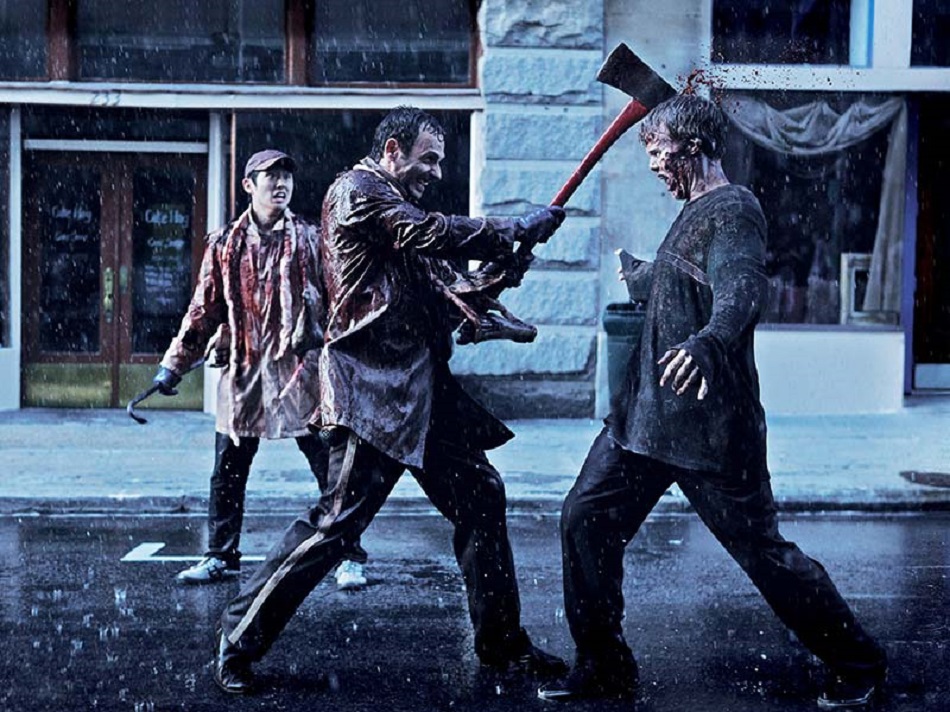 Imagine that you wake up one day and everyone that you know is gone. You walk outside and look up to the sky. Out of nowhere, something attacks you. When you look to see what tried to hit you, you witness something that should be impossible. A zombie crawls its way to consume your flash.

As much as you may believe that this is something taken out of a science fiction novel, you don’t want to be the guy that wasn’t prepared for it. This is what got me thinking about the best zombie killing weapons. Just getting something that kills isn’t enough to survive the endless night.

The most effective way to kill zombies is putting them all in a specific location and bombarding them. Now, assuming that you don’t have the resources to do this, and that building a bomb is considered terrorism, you should stick with legal weapons.

So, the next logical step is to aim for the head. Unlike Thor, you can avoid a lot of trouble if you go for the head. Still, you must have a strategy that allows you to hit the head and protect your skin so you don’t get bitten.

This is what you’re going to find below. In this article, we’re going to view the best zombie-killing weapons, so you can decide for yourself which one is the best one for you.

This way, if a zombie does come your way on a beautiful sunny day, you’re ready to go for the head and survive the endless night. Also, don’t forget that to survive the zombie apocalypse you need more than just weapons. This is why prepping is so important.

You want a strategy that contemplates food, water, shelter, an escape plan, and anything else that you might need. Anyway, let’s cut to the chase and see the best zombie-killing weapons to make sure that you’re the last person standing in this apocalypse.

A sharp axe is one of the best weapons in a zombie apocalypse. After you’ve taken care of your shelter, your food, and your water, it’s time to worry about your arsenal. Now, as much as fire weapons have their own place due to how hard it can be to get ammo for it, we’ll consider other kinds of weapons. The kind that won’t leave you unprotected.

So, the reason axes made the cut is that it’s a powerful weapon that when sharp, can cut off zombie heads as if they were paper bags. It’s important that you learn what is the best way to use an axe. In this case, you have to learn the movements that will allow you to cut their heads off while using the least amount of energy possible.

Look for axes with a sharp, metalhead and preferably a metal handle. You can still use a wooden handle one but the metal ones are more resistant. This will ensure that you can hit as many zombie heads as you need without having the axe breaking or becoming blunt. The Husqvarna axe is the best axe model for a zombie apocalypse. Check out this zombie killer here.

Another classic of slasher movies and zombie apocalypse stories is the machete. This is one of the best weapons if you’re going to face the jungle, so it’s perfectly suited for a zombie Armageddon. The endless night will become brighter with a powerful, stainless, sharpened machete.

Now, it’s important to aim for the joint between the head and the neck. If you go straight for the zombie’s head, the machete may get stuck. This will obviously cause you a huge problem since you can’t waste precious minutes with your main weapon stuck in a zombie while others are trying to eat you alive. Also, make sure that your machete is always sharp and easy to access.

A good way to keep the machete safe and sharp is to have a sheath. It will protect the blade and keep it sharp for when you need it. Look for knives that have a double edge. It’s usually a straight side and the other has indentations. This is a great strategy for you to have versatility with your weapon. The Fiskars machete has these exact characteristics that you can use against zombies. Check the best pricing here.

Another weapon that is going to cut some heads off and smash many skulls is the chainsaw. This weapon will keep you safe and help you cut your way through the most powerful zombie herd like Rambo. All you have to do is to turn it on and pass the saw through the zombies’ necks while being careful to not get contaminated by the blood spilling all over.

The only downside to the chainsaw is that you must be careful to always have power. You don’t want it to stop working when you’re surrounded by the living-dead party. Also, remember that you always have to go for the head. Don’t be a God Of Thunder and miss this one.

The chainsaw rarely gets blunt, but it’s still something that you should worry. Another thing to keep in mind is that you have to protect your neck and your back. Zombies are slow, so you don’t need to worry

The best chainsaw has a tension system, lightweight, and a powerful battery. The Greenworks cordless chainsaw is the best model that won’t let you down when the dead rise. Find your chainsaw here.

The crossbow is one of the best long-range weapons even though there’s the advantage that it needs ammo, in this case, arrows. The bad part about having a weapon that needs ammo is that you may eventually run out of it. It’s also heavy to carry both weapon and the ammo. This will slow you down. Still, if we’re talking about regular zombies, they’re slow and dumb, so you can still use a crossbow without it being a problem.

The good part about a crossbow or any weapon that needs some sort of ammunition is that you don’t get tired while using it. For instance, your arm will get tired after a while when you’re using a machete or an axe because you’re physically forcing your arms. This won’t happen with the crossbow because you don’t have to force your muscles as much to shoot the zombies.

Now, an important tip is to keep your distance since the long-range of the crossbow allows you to do that. The reason is that it will give you enough time to recharge the weapon after your last shot.

The Center Point Sniper Crossbow is the crossbow that we recommend. It’s light and easy for you to learn how to use it. Take a look here.

A knife is one of the most versatile tools and weapon that you can own. It works for nearly everything. In the case of a zombie apocalypse, the best one to get is the tactical knife. It’s perfect for hostile situations where you’re going to need a pointy edge more than anything. Like the machete, you must take care of your knife to make sure that it’s always sharp.

Now, as much as the knife does work in a huge variety of situations, you must be careful if you’re using it to slice some zombies. The reason is that the knife that cuts heads off will contaminate the food that you cook. For this reason, you should be careful with the use you give to the knife.

A club is one of the most ancient weapons in history. It was used in nearly every war in the Western World. It’s pretty much a baton with spiked metal pieces at the tip. The club is slightly heavier than most other weapons that require you to swing them to hit the opponent. This makes the hit stronger and more fatal to the zombies. If you’re strong enough, you can take them out with one single hit.

The best clubs are usually made of metal or wood. The secret is to hit hard in all directions to make sure you don’t leave a vulnerable spot while you’re fighting one zombie. The spiked metal pieces will likely give you an important advantage, helping you get out of there before you get bitten.

A nice tip is to look for a club that is light while still being able to hit the zombies hard. You can even make your club with a baton or a baseball bat and creating the spiked metal pieces yourself. The African Club is a nice model if you don’t want to handmake your club. Choose your favorite here

This weapon is a must-have when SHTF. It’s like a swiss knife but much better. Imagine a weapon that can do everything from killing zombies to breaking chains. This is what the multi-purpose demolition tool will do for you. No door or zombie will stand on your way.

This heavy metal bar will break skulls and unlock the gates. You can use it as a spear, baton, or any other purpose that you can think of. Another great thing is that this weapon is resistant and nearly unbreakable. You can fight dozens of zombie herds and not have a single problem with it.

So, make sure to have this weapon even if you opt for another one on the list. Make sure that it’s made from a resistant metal and that it works well with different purposes. The Stanley FatMax Xtreme is the best model out there. It’s a full bar that can take any zombie out. Get yours here.

A rifle is the only fire weapon on the list. The reason is simple. Fire weapons are not that practical in the long run. The reason is that eventually, you’re going to run out of ammo and be left with something heavy and useless. Still, if you have a machete and a fire weapon, for example, things start to get more interesting.

So, if you do have another weapon, then the rifle becomes more attractive. It has a lot of firepower and will give you the advantage of it being a long-range weapon.

Make sure to pick one that you know how to use and that you have ammo when the zombies come knocking on your door. The Gammo Rifle is a great option. Click to view pricing here.

Make sure to pick resistant weapons that can actually last you for a long time. Also, make sure that the material does not easily break. If you follow this and pick, at least, one of the weapons above, you won’t have problems to cut the zombie heads off and survive the rise of the living dead.

So, pick your weapons, do your prepping, and create a strategy to survive the long nights when the zombies arrive. If you do this, you’ll be able to be the last person standing and also thriving.